Introduction to the Delta II 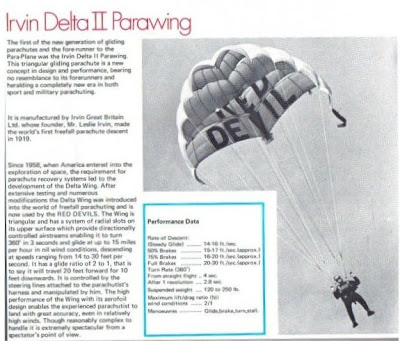 Extract from the Delta II Parawing manual circa 1969

THE Delta II Parawing has been known as the Rogallo
Wing, Flexwing, Limp paraglider and the individual deployment glider. Several of these terms have only recently come into being, thus leading one to believe that the Parawing is a recent development. This is not the case, however, for the Parawing was conceived in 1945 by Mr Francis M. Rogallo, an Aeronautical Engineer employed by the US Government. Working at home in his spare time, Mr Rogallo experimented with his new device, testing it in a home-made wind tunnel, free flying it as a hand launched glider and tethered outdoors, as a kite. His private endeavor spanned thirteen years from 1945 to 1958, when America’s entry into the exploration of space brought considerable interest from Government agencies in this and other unconventional ideas.


After extensive testing, the practical application of Mr Rogallo’s invention was quickly realized.
With its gliding ability and pin-point accuracy it could be used for the safe return of astronauts from space, air cargo delivery, Individual troop use and other applications where its flying characteristics could be put to advantageous use.
Realizing that the Parawing represented a totally new concept in deceleration devices, Irvin Industries began a development programme on the wing in 1966.
After three years of extensive testing, which saw the incorporation of many design innovations, the Parawing has been introduced to the world of sport parachuting.
Extensive testing is continued today by various agencies who are looking at advance designs of the raving for future applications.
Technical Data

The Delta II has a 254 square feet surface area, consisting of fourteen gores, each having five aerodynamic lifting sail panels.
The canopy material is basically 2.25 ounce ripstop nylon cloth. calendered and silicon treated.
Both material and geometric porosity (open area) vary as a function of wing location.
However, the total canopy porosity is 3.2 per cent of the wings surface area under typical descent conditions.
The suspension network consists of ten leading edge lines (five each side to complementary front riser), and six keel lines (alternately to rear risers, three lines each side). These are all nylon and have an ultimate tensile strength of 1000 pounds. In addition, there are two slot lines, two panel lines, and two steering lines which are connected to the two control lines.
These lines are also nylon and have a 750-pound tensile strength.
Risers are constructed from 6,500-pound type XIII nylon webbing with 3.600- pound type VIII keepers.
The Parawing’s reference size is measured from the trailing edge along the keel and terminates at a focal point of the 90° annular section (the nose!). Thus the Parawing has a reference keel length of 19.5 feet and is written ‘19.5 ft Lk.
The high performance of the Irvin Delta II Parawing is due to its basic airfoil design accompanied by the introduction of radial louvres in the wings upper surface to provide directionally controlled air streams.
Such controlled air streams promote laminar flow control. wing shaping and a thrusting action, These louvres give a slight saw-tooth profile to the wing created by incorporating extra width to the trailing edge of the gore panels. They also provide a favourable increase in the stability of the wing when compared to the ‘solid’ or non-slotted versions.

The Red Devils and the Irvin Delta II

The Irvin Delta II Parawing high performance canopy was first aquired by The Red Devils Free Fall Team in the late 1960's. This triangular gliding parachute was a new concept in design and performance, bearing no resemblance to its forerunners and heralding a completely new era in both sport and military parachuting.

The Red Devils first met the Parawing in the winter of 1967, during a visit to the US Army Parachute Team, The Golden Knights, Sfc Dick Morgan was working on the test project in which L/Cpl Don MacNaughton very quickly became involved. Don made several jumps with the early wing, some more successful than others - all of them painful.

Fortunately, by my introduction to the wing in the spring of 1968, most of the problems, both of opening and flight, had been solved, and though the malfunction rate was still high, I was very impressed with the wing’s performance and potential.

I became convinced that this beast was the forerunner to a new generation of parachutes, which would both sound the death knell of the PC and open up a completely new dimension in our sport.

I determined to follow the project with close interest and at the same time I ordered three wings from the first batch to be produced for commercial purposes. Early in 1969 I journeyed back to Fort Bragg to take delivery of this order, and pick Dick Morgan’s brains. Dick had been on the project for over three years and what better teacher?

Due to the awful stories of back breaking opening shocks, unexplained collapse in flight, violent uncontrollable spins, stalling into the ground, etc., to be heard at that time (and even now!) I wanted to gather as much factual knowledge, experience—and reassurance—as possible before exposing myself or my team members to these possibilities.Armed with the results of five days’ virtual interrogation of poor old Dick, pages of graphs, line length and trim figures, and the witnessing of over 200 wing descents by the Golden Knights (I was unable to jump there due to ‘lack of status’—unofficial visitor) and my three new wings I moved up to Philadelphia to meet Steve Snyder.

Steve is an aeronautical engineer, parachutist extraordinary (D5) and pilot of great repute. Amongst other things he invented the 0SI (Opening Shock Inhibitor) which is the whole key to the Delta II. Being a man of enormous enthusiasm and drive, it seemed like only minutes before he had me sitting in his Cessna 205, at 4,500 ft, with a wing in my backpack—and I was terrified! Being British and all that. I had to go, and promptly fell out of the plane whilst trying to get on to the wheel!

I made one of the quickest stabilisation and pulls in the history of parachuting, and watched, horrified and entranced, as the thing above me began to sort itself out; this fluttering, unwinding frightening mess proved to be what I now accept as a good opening.After several adventures I returned to Aldershot with my three new found treasures, only to find a political storm raging as to whether we could jump the wings at all - never mind on demonstrations!

The BPA were both sensible and courageous (?) in their backing and handling of the matter. Having finally gained permission to use the wings in the UK we caught a severe cold at the Twyford Fête.

I cant remember why the wings missed, maybe Gus can? Needless to say, this didn’t help our cause much, but these things do happen—don’t they . . .? Facts And FiguresAt the time of writing, I have over a hundred descents on the wing (and one on a tri-conical reserve—an education in itself) and feel ready to throw a few pearls to you lot...

Wings, and other geometric creatures to follow, are not just parachutes, they are high speed, sensitive, flying machines. I readily admit that there are many unknown areas in this new science, but I do know that anyone who jumps them consistently will never go back to 'flat circulars' - to me now even a Mk I PC feels as dead and unresponsive as a double L. 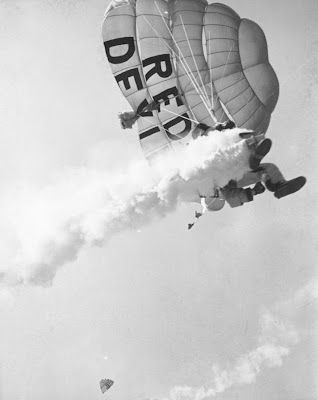 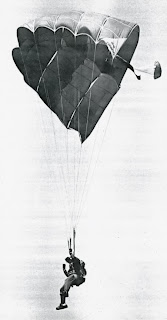 Follow current instructions and you won't go wrong, though I feel that neatness is very important, and we have found that a two-man pack team - with the number two providing tension to the canopy is the best answer. I also feel that the control panel - inside centre section - should be pulled neatly up into its adjacent lobe; this also brings the toggles up snug to the keepers.OPENINGS To be seen and experienced to be believed and understood. 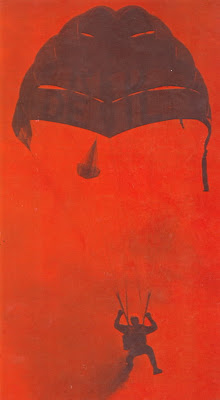 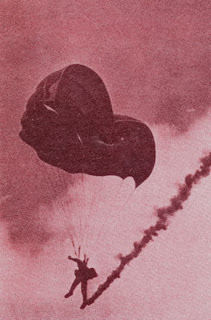 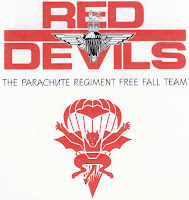 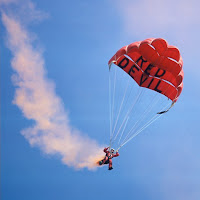